How do chickens lay eggs? 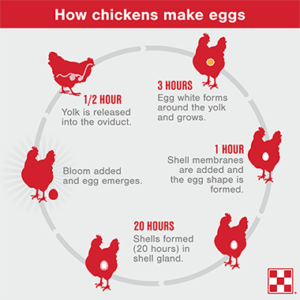 Most flock raisers will tell you there’s something special about walking to the backyard and grabbing a few eggs for breakfast. In the “pets with benefits” equation, farm fresh eggs are protein-packed gifts that families diving into self-sufficiency have come to love.

HOW DO CHICKENS LAY EGGS?

The biggest involvement for your hen is creating the eggshell. The shell defends the yolk from harmful bacteria and keeps the chick or yolk safe. Hens spend much of the egg formation process making sure the calcium-rich shell is strong and protective. When the lights are off and the hens are sleeping, that’s when most of this internal work happens.

The fact that shells are created at night is clear when looking at the egg formation timeline. For example, if a hen started the process at 7 a.m., she would create the eggshell starting around 12 p.m. and continue for 20 hours during the evening and through the night.

To ensure your laying hens achieve a consistent supply of calcium through a blend of oyster shell, vitamin D and manganese, all Purina® premium layer feeds are infused with the Oyster Strong® System. This exclusive system utilizes larger particles of oyster shell to provide a slow and steady release of calcium during the night when hens are forming eggshells. Vitamin D is like the taxi that gets the calcium into your hen’s bloodstream where it’s needed, while manganese helps strengthen and create the structure of the egg.

Here is an approximate timeline for how an egg is formed:

Each female chick is born with thousands of immature yolks, known as chicken ova. For most chickens, the ova begin to develop into yolks when the hen is 18 weeks old. Once a yolk has been selected to develop, it spends the next 10 days growing. When it is time for the yolk to be released, it breaks out of its protective membrane and drops into the infundibulum or the beginning of the oviduct. This release takes about half an hour.

As the egg enters the hen’s reproductive tract, the egg white begins formation, starting with a clear, protective yolk casing called the vitelline membrane. As the yolk enters the magnum, layers of thick and thin proteins, known as the albumen, create the egg white. As the contents travel down the oviduct, they spin. This spinning motion causes the formation of the chalazae or the white, stringy pieces you see in an egg. The chalazae’s role is to keep the egg yolk in the center of the egg instead of sticking to the shell.

Just before the egg enters the shell gland, it spends an hour in the isthmus. While there, the inner and outer shell membranes are added around the albumen and the contents begin to take on the oval shape you expect.

The most significant piece of the egg formation process happens in the uterus or “shell gland” of the hen. The developing egg spends about 20 hours in the shell gland, where the shell is formed and eggshell color is added during the last 5 hours.

The shell formation takes the most amount of time to complete. It is important that the hen is fed a diet that contains the proper nutrition, so she has the nutrients needed to make the eggshell as strong as possible. A solid shell is the best defense against bacteria that will try to get inside the egg.

Eggshell formation requires about 4 grams of calcium per shell; 2 grams of which must come from the hen’s diet. Hens that lack proper calcium levels typically produce soft or brittle eggshells. Sometimes an improper calcium balance can cause hens to pull calcium from their bones to produce eggshells, weakening their overall skeletal structure.

Our most popular layer feeds

In breeds that lay colored eggs, pigments, called porphyrins, are secreted from cells within the uterus to add color to the eggshells during the last 5 hours of shell formation. Blue egg layers add pigment early in the shell formation process, which is why these shells are blue all the way through. A combination of blue and brown pigments produces a green shell color, as with the Olive Egger breed. Hens that lay white eggs do not produce any pigments during shell formation.

The formed egg travels to the vaginal area where egg bloom is added to the shell as the egg passes through. Egg bloom, or the cuticle, is a protective coating that works with strong shells to protect the egg from bacteria. A natural lubricant is also added to the shell for a safe exit through the cloaca.

About 30 minutes after laying an egg, the next yolk will be released from the ovary and the process will repeat itself until she has laid 8 to 12 eggs. After that, she will take a day off from egg production.

To help the egg-laying process go smoothly and to keep hens healthy and productive, always provide your hens a complete layer feed. After all, the formation of nutritious eggs is contingent on what your birds eat.

This entry was posted on Monday, May 2nd, 2022 at 6:25 pm and is filed under News & Updates. You can follow any responses to this entry through the RSS 2.0 feed. Both comments and pings are currently closed.